While Haredi authorities recognize this, they cannot permit themselves not to wage an all-out war against mobilization. Candidates for conscription are intimidated and condemned, while those who do sign up are cursed and excommunicated.

In sermons in the yeshivas, army service is compared to apostasy or suicide, and many families repudiate their enlisted children and cut off all contact with them. It seems safe to assume that such severe sanctions against joining the army would not have been needed unless draft was highly attractive. It is particularly tempting for those youngsters who were frustrated by the Haredi way of life and especially so for the Shabab.

There is nothing like the military to compensate them for being deprived of a chance to discharge physical energies, express masculinity and seek action. The army is a place where one cannot only legitimately realizes one’s violent tendencies but where possessing such tendencies might be a criterion for excellence (see Hakak, forthoming).

Taken from “Body, Violence and Fundamentalism: The Case of Jewish Ultra-Orthodoxy” By Gideon Aran.

Haredi Body Culture Has a Rich Repertoire Of Indirect

As in other puritanical cultures, Haredi body culture has a rich repertoire of indirect and suggestive expressions for talking about intimate issues or areas, which can nonetheless be interpreted as sharp and serious.

Some expressions for parts of the body appear in code, usually taken from religious sources. For instance, pubic hair is nicknamed “the lower beard”, which sounds comical, though the expression actually comes from the Babylonian Talmud. And how could we neglect to mention the common epithets for the penis, in a secret language of Kabbalists and euphemism.

An outsider could not guess that “sinew” is a synonym for “penis”. There is a wide range of expressions for describing the penis, most of them rich with traditional meanings, such as “keystone” (even ha’rasha). The most common name for the penis is “the organ” (ever). With the cheeky smile of one skirting the edge of the legitimate, young Haredim repeatedly quote from the Mishna: “There is a small organ in man which satisfies him when in hunger, and makes him hungry when satisfied.”

Taken from “Denial Does Not Make The Haredi Body Go Away Ethnography of a Disappearing (?) Jewish Phenomenon”, By Prof. Gideon Aran. 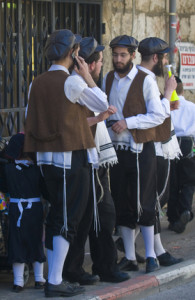 All the adults in his environment are placed against him in the role of socializing agents, including his older brothers (even though the age gap may be small), neighbors, fellow worshippers in the synagogue, and even passersby from the community.

They are enlisted to examine his body, to castigate, to caution and to blame. Less commonly, positive instructions are issued: “delicate hands are a sign of scholarship”, or, “see how that student gently descends the stairs one by one, quite like the son of a king”.

Brokers of discipline have a key role in the Haredi yeshiva. In recent generations, and mainly in yeshivas affected by the historical “morality movement” (musar, which some of the Lithuanians disdain, though influenced by it), the special role of “supervisor” (mashgi’ach) has been created. He does not deal with frontal Torah teaching, but rather with moral education. END_OF_DOCUMENT_TOKEN_TO_BE_REPLACED

A literary autobiography recently published by a former yeshiva student offers a fascinating testimony to the Haredi bodily regime. With credible and precise realism, it describes the daily (and nightly) routine in the life of a fourteen year old boy during the month of Elul. 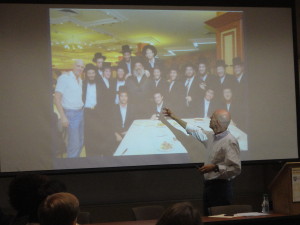 The sensual dimensions of Haredi life and their characteristic tensions, such as the dissonance between the function of the mikveh as a purifying pool and its revolting look and smell are emphasized.The author is particularly sensitive to the contradiction between the aim of making the body vanish, and its increasing presence in adolescence.

For him, the intense activity devoted to repressing the body actually reinforces its presence, and the attempts at purifying END_OF_DOCUMENT_TOKEN_TO_BE_REPLACED

A society in crisis tends to deal with control over the body and is occupied with ensuring its intactness, and also shows increased interest in its reproduction. In the Haredi era the subject of producing or replicating the proper Jew has become a task of supreme importance that almost entirely dominates community life.

This includes efforts to shape the proper body. The correct Haredi body is formed and supervised in mainly negative formal and informal ways: rather than presenting youngsters with an ideal model and preaching to them about qualities that should be adopted, they point to examples of deviance to be avoided, and warn of indecent attributes from which one must free oneself.

The Haredi boy is mostly taught how not to behave. His world is filled with bodily prohibitions, all of which are accompanied by threats and scares. From childhood to adolescence he is constantly told by his parents, teachers and others in the community, “don’t cross your legs”, “don’t kneel down (like a Christian)”, “don’t lounge about on the sofa”, “take your hands out of your pockets”, “don’t jump around”, “don’t look at your reflection in shop windows”, “don’t open the top buttons of your shirt, even if it’s hot”, “don’t stroke cats and dogs”, “don’t wrestle with other kids”, “don’t hug your kin”, and so on.

Throughout the day boys at kindergarten are berated should their hand accidentally touch that shameful area, and before going to sleep their hands are placed outside the blankets, which are pulled up to the neck and smoothed down tightly around the chest, in case the hands should wander towards the penis.

Supervision over the teenaged body continues throughout the night. Anyone sleeping on their stomach is woken up to change their position so as to prevent their penis rubbing against the mattress and causing unintentional ejaculation. END_OF_DOCUMENT_TOKEN_TO_BE_REPLACED

Prof. Gideon Aran: The priestly protect the boundaries of the body

The priestly tendency to protect the boundaries of the body against the danger of impurity characterized the children of Israel on the rivers of Babylon, the period of the return to Zion as told in the Torah, and their diasporic descendents who lived under the Talmud.

With the Haredim it has become quite an obsession. As the classic question about tribal identity in the form of “who is a Jew?” is narrowed and sharpened, and replaced with the test of “who is a Haredi?” the defense mechanisms that envelope the body have become more and more severe and specific. Note, for instance, the attention paid to openings of the body, and to the flow of fluids into and out of it. Urinating, for example, is not an insignificant and neutral issue, but rather a whole ceremony carried out under precise surveillance. END_OF_DOCUMENT_TOKEN_TO_BE_REPLACED

The reality of modern secularity, with its abundance of temptations, is seen as a threat to the continued existence of the Haredi world. Even though the Haredim invest much effort in raising walls so as to isolate them, in Israel the boundaries between them and their Jewish environment are thinner and more penetrable than any that ever existed between them and their non-Jewish surroundings.

In this situation of defensively rallying around in the face of a perceived existential danger, Mary Douglas’ reading of ancient Israel is most valid here too. According to her thesis, when there is increased awareness of a threat to a group’s external boundaries, there is a tendency to deal more intensively with the bodies of the group’s members as they try to ensure their wholeness. END_OF_DOCUMENT_TOKEN_TO_BE_REPLACED

Among the Israeli Orthodox, the extent to which the foot is covered up is an indicator of religiosity. For instance, similarly to other Israelis, the modern orthodox often wear sandals during hot summer days.

In yeshiva circles this is seen as proof of a decline in the neo-orthodox commitment to the Torah and its mitzvoth. In the national-religious youth movement a fierce argument rages between the tsabarim, who are accused of slighting their religion by wearing sandals with no socks, and those who do not take their socks off, thus termed by their friends-cum-rivals as being “on their way to becoming zealous proto-Haredim” (chnioks, or, “shechrim”). At the top of the pyramid of devoutness sit those who do not expose their arms, knees or feet. END_OF_DOCUMENT_TOKEN_TO_BE_REPLACED