Gideon Aran is a professor of sociology and anthropology at the Hebrew University, Jerusalem. 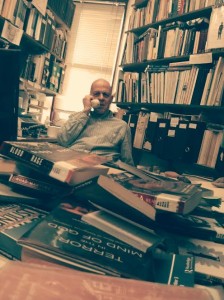 His field of expertise is the social scientific study of religion, on the one hand, and extremism, militancy and violence, on the other hand. In recent years he focused his teaching and writing on the intersection where the above two meet, namely fundamentalism and contemporary as well as historical forms of ultra-religiosity; oppositional underground cells; political (Ethno-National) charismatic radical cults; and religious terrorism, in various Western and Middle Eastern contexts, especially in the Jewish/Israeli one and with regard to the conflict with the Palestinians in particular.

Aran’s research combines intensive case study based on fieldwork with theoretical-comparative perspective. His latest academic publications concern “Jewish Religious Violence”; and “Religiosity and Super-Religiosity”. An essay on “Blasphemy” is forthcoming. An updated and revised version of his dissertation titled The Roots of the Bloc of the Faithful, Jewish Settlers’ Sub-Culture, Zionist Theology and Contemporary Messianism just appeared in print.

In addition he has authored and presented papers about Biblical, medieval and contemporary zealotry; Zionist political culture; church and state in Israel; some particular sectors and movements in present day Jewry, like the Haredi ultra-orthodox; and messianism and mysticism and their political implications.
Currently he is writing up the results of an extensive field study of (mostly) Palestinian suicide bombing, tentatively labeled The Cult of Dismembered Limbs (to be printed in U of California Press). In this study the center of Aran’s scientific interest gravitates towards specialization in terrorism and specifically religious suicide terrorism.